Just want to invite everyone to Comicon this weekend, where there will be an extra-special sci-fi comic extravaganza written by Mav and drawn by me. Also, if you come at the right time there will be babes in tiny silver skirts.

If you can't make it, you can still check out our website or buy the book at Indyplanet or the superspecial edition at Blurb.

( Collapse ) And not a moment too soon.

This girl is actually very cute, but her face is challenging to draw. I left out the ones where I made her look really ugly.

On a completely unrelated note, I have a headache and a strong desire to burn things.

Not sure yet how or if I'm gonna integrate drawings into the new website which is really more about music...

The wait is over!

I have a new musical website. Sort of. Still have a lot of work to do. To make it less than completely pointless, I've uploaded a new song, which features the lovely voices of

Blahrr. That was so not as good as it made me think it was going to be. I blame Orlando Bloom. Last night I was writing an in-depth review in my head, recounting all the ways in which the movie could have been but was not awesome, but this morning I don't really care.

Oh well. At least Naomie Harris is still hot (black teeth and all). And there was a pretty sweet trailer attached. 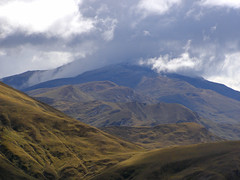 mountains
Originally uploaded by max1975.
Jenn and I have returned from New Zealand, and pictures are starting to trickle onto flickr. Check 'em out.

There is no such thing as "Facism."

It is not a real word. And if it was, it would likely mean "hatred or intolerance of another face or other faces" and not "a governmental system led by a dictator having complete power, forcibly suppressing opposition and criticism, regimenting all industry, commerce, etc., and emphasizing an aggressive nationalism and often racism."